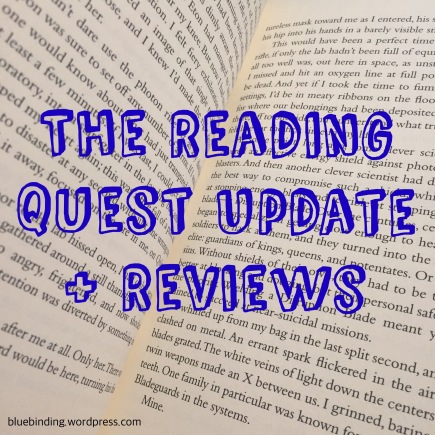 Hello, hello! We are halfway (and a litte more) through #TheReadingQuest hosted by Aentee @ Read at Midnight, and I think I’m doing pretty good! I’m sure there are people reading far more than me, but considering the speed in which I usually read, I’m quite happy. (During this Quest, I am reading each book in about four days, when usually it would take me over a week with school going on.)

I have really enjoyed the books that I have chosen so far and have been able to keep up with my original schedule. I have read three books so far: Shadow Run by Adrianne Strickland & Michael Miller, To All the Boys I’ve Loved Before by Jenny Han, and I’d Tell You I Love You But Then I’d Have to Kill You by Ally Carter. I am currently reading The Winner’s Curse by Marie Rutkoski, but unfortunately I am a little behind. If you’re interested in what I plan on reading for the rest of the Quest, check out my sign-up post!

All of this is according to the info I have entered into this lovely spreadsheet created by Lauren @ Wonderless Reviews. (Thank you sooo much, Lauren, for creating such a helpful tool in my reading adventure!!) Also, don’t judge for my rather low level/EXP, I am doing this for FUN, and I am not concerned about the points!

To All the Boys I’ve Loved Before by Jenny

If you’re participating in #TheReadingQuest, how are you doing? Have you read and enjoyed any of these books? Let me know what you think!